In Search of Lost Time: Mapping the Chip on Russia’s Shoulder 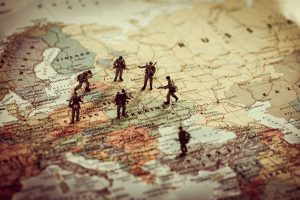 Before the shooting starts anew, let’s mention the war. Not the war we know, but the one that lives on in the often-indecipherable psyche of Russia, laced as it is with nostalgia and wounded pride.

Widely recognized in the West as the beginning of the end for Nazi Germany, Operation Overlord – the amphibious landings in Normandy – made but a comparatively modest contribution to the final victory in Europe. Much less well-known, Operation Bagration – unfolding at roughly the same time on the Eastern Front – pitted a million German soldiers organised into four field armies against a Red Army force some 2.5 million strong and backed by about 6,000 tanks, 33,000 field guns, and 8,000 aircraft.

By the end of the fighting, 28 of the 34 divisions of the German Army Group Centre were destroyed with 380,000 combatants killed and 160,000 captured of whom 57,000 were paraded – 20 abreast – through Moscow. Operation Bagration, virtually forgotten outside Russia, not only swept the Germans out of Belarus and large swaths of Poland, but also broke the Wehrmacht’s back. The German Army never recovered from the losses of materiel and manpower.

Reading the great classics of WW2 history and reportage – Richard Overy’s Why the Allies Won, Ian Kershaw’s Fateful Choices, Vasily Grossman’s Life and Fate, etc. – is possibly the best antidote against propaganda. Who knew that WW2 started in July 1937 with the Japanese invasion of China and not with Germany’s September 1939 assault on Poland? Who knew that Hitler borrowed the concept of Lebensraum from the British and French colonial empires and America’s Manifest Destiny? Who knew that Social Darwinism – i.e., the survival of the fittest – may well have inspired Nazi racial theory?

And, most importantly given the present geopolitical tensions; who knew that homo russicus feels ignored, humiliated, and wounded – and has long demanded, largely in vain, an acknowledgement of sacrifices made and perhaps even a measure retribution for the losses sustained?

One who knows is Svetlana Alexievich, chronicler of the Russian soul and winner of the 2015 Nobel Prize in Literature for her “polyphonic writings – a monument to suffering and courage in our time.” As the ominous beat of war drums echoes along the borders of Ukraine, Ms Alexievich has a message for the armchair generals whose binary approach (us good / they bad) blissfully ignores the many past hurts and emotional subtleties that threaten to light the fuse of war.

Lest we again sleepwalk into a conflict of unforeseen scale and intensity, consider the long-suffering average Russian who, delivered from Communism, had to endure the dismemberment of his country at the hands of Mikhail Gorbachev and the rape of the rump state by assorted oligarchs under Boris Yeltsin – all the while watching how a former superpower was mercilessly brought to its knees by the West – and kept there.

When long-range Tupolev Tu-95 ‘Bear’ bombers appear over the North Sea, it is perhaps not so much to probe NATO’s air defences and response times as it is to display a remnant of Russian power – an exercise in nostalgia meant for domestic consumption. The live-fire naval exercises off the Irish coast, planned for February, are likewise an attempt to relive more glorious times when Russian warships could roam the seas without an escort of tugboats – now needed to assist with the inevitable mechanical breakdowns.

The apparently misguided Russian fear of NATO encroachment, and shrill demands to roll it back, becomes a slightly more understandable, if not reasonable, when looked at from their perspective.

Although borders between empires were fluid, Ukraine has been Russia’s forecourt for untold centuries. The part of the country east of the Dnieper River was assigned to the Russian Empire by the Eternal Peace Treaty of 1686 which formally settled the conquests and losses of the Russo-Polish War (1654-1667). Following the Partitions of Poland and the Russian defeat of the Ottoman Empire in 1774, Crimea was brought into Catherine the Great’s fold – whereby present-day Ukraine became an integral part of the Russian Empire.

In Ukraine, the October Revolution of 1917 sparked a civil war followed by a Red Army reconquest in 1921. A year later, the Ukrainian Soviet Socialist Republic became one of the founding members of the Soviet Union. The country reclaimed its de jure independence on 26 December 1991 when the presidents of Ukraine, Belarus, and Russia met to formally dissolve the Soviet Union in accordance with its constitution. Earlier that same month, over 90% of Ukrainian voters had expressed their support for independence in a referendum.

However, the sudden loss of Ukraine and its westward drift as of 2005 has given rise to a Russian version of the stab-in-the-back myth (Dolchstoßlegende) whereby then-president Boris Yeltsin, a tippler of note, is usually assigned the role of traitor.

To begin to understand the many frustrations handed down over generations, and Ukraine’s deeply rooted place in the Russian psyche, Svetlana Alexievich sat down at the kitchen table with hundreds of ordinary Russians to listen to their life stories. In Secondhand Time, she documents in fine prose the laments about the broken promises of freedom, tolerance, and opportunity made by Presidents Gorbachev and Yeltsin as both laid the Soviet Union to rest. A former party official comments that in Soviet times at least nobody was building “mega yachts with champagne showers.” Another former apparatchik notes that the humanities went out the window with the arrival of thuggish capitalism: “Who cares if you had read Hegel’s complete oeuvre? If you have no money, you’re nothing.”

What pervades is a search for lost time, a quest borne with resignation but simmering with anger. President Vladimir Putin taps into this vast reservoir of an ill-resolved past in order for his country to regain the respect it lost after the chaotic dissolution of the Soviet Union. It perhaps helps explain his domestic popularity which continues to mystify most Western observers. Whilst he may have helped himself to some of the loot of crony capitalism, Mr Putin also reduced the might of the oligarchs and brought them to heel.

Most of all, President Putin is admired at home for his insistence that Russia be granted its “rightful” place in both European and world affairs. The Putin Doctrine aims to revisit and redraw the geopolitical settlement that ended the Cold War. As the successor state to the Soviet Union, Russia essentially demands the same level of respect as was awarded to the former superpower – and a sphere of influence to match.

In President Putin’s view, and to paraphrase George Orwell, some states are more equal than others, Russia being one of those. It explains the extraordinary demands placed on NATO to withdraw to its pre-1997 borders and the insistence that Russia be granted veto-power over the foreign policy choices of neighbouring countries – including Sweden and Finland.

In a sense, President Putin’s Russia is screaming for attention. The question now facing his Western opponents has been reduced to finding a way to accommodate Russia without giving in to its impossible demands; or punishing the country for throwing a tantrum. Just like a toddler having a fit, ignoring may not be an option. Most importantly, President Putin must be allowed to climb down without losing face. An acknowledgement of his grievances, legitimate or otherwise, will surely go a long way to ensure the peace. This is also where Western hawks clash with German doves: Berlin understands better than most the mortal danger of prodding a wounded bear.